Each list in excel represents one object definition. The name of the list must match the exact name of the object. Each list is divided into rows, columns and cells:

Double - A floating point number Integer – A whole number which has a minimum value of 0. Enum - Ordered listing of all the items in a collection used for data validation. Only allowed values from the list can be inputted. String - A sequence of characters, Text.

Any numeric value (Double, Integer) has to be formatted as a number in an excel sheet.

In SAF, supported units are metric and imperial. Units are defined in the "Model" sheet.

Units can be optionally displayed in property headers. The unit system used in SAF file is given on Model sheet page by the user. Values given in SAF format should correspond to predefined values per system unit set. Table of predefined and expected units can be reviewed on Project and specification page.****

The order of lists and columns does not matter, for import. Important is to consistently follow its naming.

For all orientation of loads and coordinate system right-handed rule is valid.

The system provides for:

It may help you to determine the direction of the individual structural elements axis if you remember what you (probably) learnt at school. Take your right hand, position your thumb, index finger and middle finger so that they are perpendicular to each other. Then the following applies (see also the image below):

Each member has several possibilities of enums, defining the Local Coordinate System (LCS). For further understanding of enums defining the LCS of the StrucutralCurveMember and StructuralSurfaceMember see the following:

For 1D members, there are several options on how to define LCS of StrucutralCurveMember:

LCS enum set on " by point"

When is LCS enum set on " by point" explanation is the following:

LCS enum set on "by vector"

When is LCS enum set on "by vector" explanation is the following:

General vector as LCS "by vector"

For 2D members, there are several options on how to define LCS of StructuralSurfaceMember:

When is LCS enum set on "axis x or y by vector" explanation is similar to StructuralCurveMember presented above with the following additional information:

LCS enum set on "Tilt of vector defined by point"

When is LCS enum set on "Tilt of vector defined by point" explanation is the following:

The tilt of the vector defined by point is a special type of LCS for mesh elements of 2D members. You can define one point in global coordinates and all local x-axis (y-axis) of mesh elements follow this point. It is an analogy to LCS by point for 1D members. This special case is mostly used when you need to add data which are depending on LCS of meshes (e.g. reinforcement, results) and should follow radial layout (Circle slabs, silos, etc…). An example is presented below.

Unique IDs – Unique identifier number for each object in the project and the model level. If the IDs are available in project, model and each object could be recognized and tracked for revisions with a third party software. Filling the cells with ID is not mandatory for analytical exchange format. 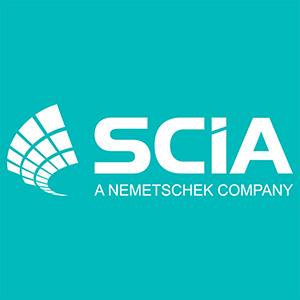